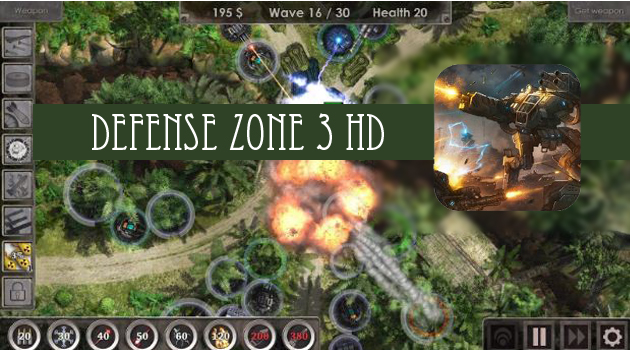 Are you looking for a defensive android game that will improve your strategy and combat skills? Defense zone HD android game is one of its kind in the gaming market. It will offer players new weapons, options galore and excellent sceneries. The graphics of the game are of high quality and full of information. If you have been waiting to start playing on defense zone 3 HD, it is your chance to select this fun packed game and make great savings.

The game has four challenging levels, which keep players on their toes every time they play. The game can be easily downloaded from a Smartphone or windows 10 enabled personal computer. It is an intensive tower defense play to keep you challenged and provides a good way to pass time. The new game is an upgrade from the previous defense zone 2 games,and contains numerous weapons compared to its predecessor. It has an additional of eight weapons that are mainly used to defend opponents.

One thing is clear when playing this game, there is an oncoming battle and one must be prepared to handle it. You have to employ your defensive skills to counterattack your enemies, with no grounds for the conflict. Because there is no story that can provide action context, players are only left is a war game played over various HD backdrops.

The game has been well balanced including enemy strength, tower statistics, special weapons and terrain characteristics. This will ensure that players are not bored while they play the game. Every level of the game will give you a new challenge. Are you willing to take up the challenge?

The game has several features that include:

-it has over 20 languages that it supports.

This is a free android app that gives you a chance to defend yourself against military threats. You are at first required to put defensive turrets in your territory and wait for the enemy to strike. Every moment you destroy your opponent, you earn points which you will use later place more defensive turrets in your territory. The turrets vary in different ways including, speed, damage type and range.

Players are required to strategically place their turrets to ensure that they destroy their enemies.

-The game has beautiful landscapes that are admirable by players

– It requires an installation for it to load easily on windows10 mobile version.

From my own experience, the Defense Zone 3 HD is a game full of action and fun. If you want to have a new gaming experience, I recommend that you download it on your android phone and play for free.