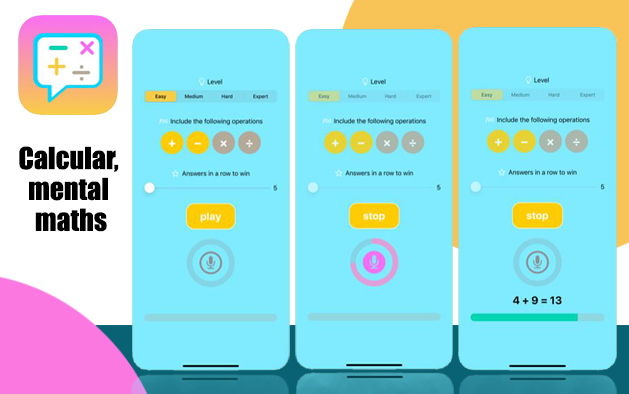 Mental maths is the method of doing calculations in your head without using any tools like a calculator, abacus or pen and paper. Mental maths proves to be really useful in our day to day lives in situations such as kinds stuck in maths while studying while others adding tax or sales price at a shopping mall, using proportional thinking while cooking to alter the recipe, calculating the tip intended for a service, converting from one unit to another or building something.

Mental maths actually helps us keep our brain sharp and quick. Like the muscles, the brain also gets stronger and efficient with every use. Mental maths also enables one to improve their sense of numbers and the ability to understand the relation between quantities.

‘Calcular, mental maths’ is a mobile based app that efficiently improves the ability of mental maths for children as well as adults.

Download and install ‘Calcular, mental maths’ on your iPhone or other suitable Apple devices. Now open the app and start practicing maths. With ‘Calcular, mental maths’ app you can easily pick up mental maths ability with less effort. The app automatically tells you the calculations out loud and you have to respond to it loud with the answer within the given time. The app recognizes your voice and gives you the right answer if you get one wrong. If your answer correctly in a row, you get to win. You can select the level you wish to improve yourselves from. The app is a great way for kids and adults to learn mental maths as it lets them improve their speed on the level they are currently at.

The app was developed by Pierre Stanislas who told me that “The compulsory Covid quarantine made him spend a lot of time alternating between work-at-home and homeschooling for his twins (9 years old), which made him realize he needed a bit of nudging to progress at mental maths… being an Apple enthusiast he looked at what was available in the AppStore and quickly realized that none of the apps approached mental maths the right way i.e. this is something that is best learned verbally, with no visual clue whatsoever.”

As per preliminary data provided to us, it shows that this app has been tested with several kids, and they have shown tremendous progress in the space in the last few weeks. With Calcular, you and your children can practice mental maths in the most efficient and fun way possible. This app tells the calculations and speaks aloud, and you have to respond out loud within the time limit.

Features of the app:

‘Calcular, mental maths’ app has features which are listed here.

‘Calcular, mental maths’ is developed and offered by Pierre Stanislas for free on App Store.

← All-in-one access to your medical data and more with HealthChampion. Thinking About Socializing? Choose Toodls →