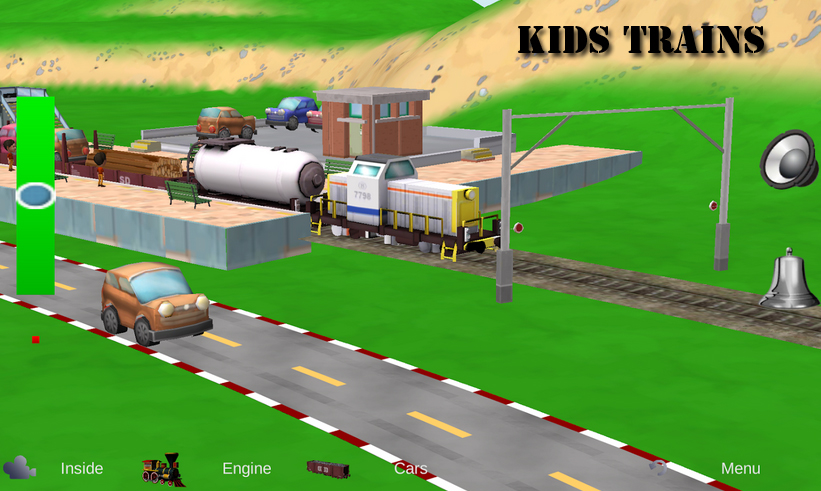 As you would expect from its name, Kids Trains is an isometric train simulator with slightly cartoonish 3D-style graphics and simple controls with large buttons meant specifically for young children. Perhaps it’s not ideal not for very young children, however, as there are no “Thomas the Tank Engine” style faces on the trains or anything like that.

Kids Trains is fundamentally a scaled down version of a more advanced app called Train Sim. The creators have taken the basics, removed the customization features, changed the graphics slightly, and made what can really only be described as a toy train set. Although there seems to be life occurring within the rather barren environment such as cars or trucks driving by and thin cartoon people with overly large heads wandering around the towns or waiting at the stations, this is still ostensibly a virtual model railway.

As with most educational Android apps, Kids Trains is free. It has a small download of only 18mb, in-game ads are minimal, and there is an option to buy a completely ad free version should you desire it. For most people, however, an hour or so playing with the free version should be enough to satisfy their curiosity.

Featuring 3 train types which appear to be an old-fashioned steam train, an industrial-looking American freight train, and a very European passenger express, Kids Trains doesn’t have many customizable choices. There are only 2 different tracks or scenes to select, plus there’s a bonus Christmas scene which adds lots of snow, igloos, Christmas trees and, of course, Santa Claus to the scenery.

The various things to fiddle with include tapping on either a noisy horn or bell, stopping at stations, and controlling the speed of the train with a slider. Swiping the screen allows the views to be panned, zoomed, and tapping the selection button will switch between the outside and inside of the train to your heart’s content. Unfortunately, there’s no challenge or reward involved in any of it.

Consequently, although the graphics are smooth and quite nice to look at, unless he or she is very young indeed, the average child is likely to become bored with Kids Trains rather quickly. There is simply not enough to do within the simulator other than try not to derail the train, and once you’ve done that a few times, it’s really not much fun anymore.

Available for Android devices, this app is meant to be a kids learning tool rather than a game, but given a child with the right amount of imagination and patience, it could possibly still be turned into one. Maybe giving names to the different cartoon people and the trains is something that children would do if they had nothing else to play with.

In conclusion, although this kids app is entertaining and somewhat educational in how cleverly put together the graphics are, it is unlikely to hold a child’s interest for long, and it certainly won’t teach anybody how to control a real train.