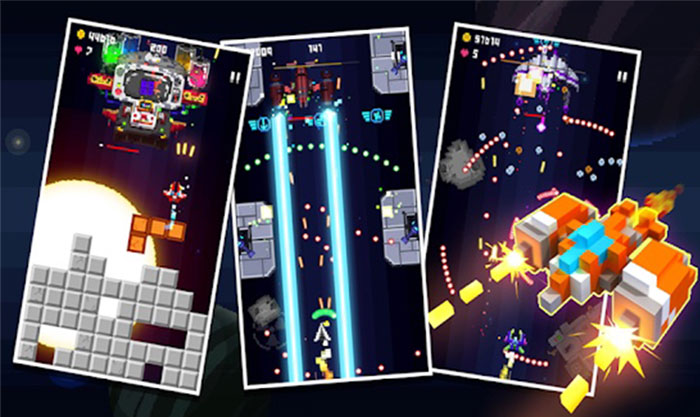 Game Concept
Game Feature Set
Game Visuals / Music
Game Replay Value
If you are ready for a classic Arcade shmup gameplay then Space War is the good space battle game which is rendered with 2D pixel graphics and would hook every retro-nostalgic into its arcade gameplay.

While I’ve tried plenty of game apps on my Android in recent weeks, I’m always searching out for new ones that have their own special entertaining gaming features on the genre, and Space War – 2D Pixel Retro Shooter by SHMUP HOLIC is wholly captivating.

If you are ready for a classic Arcade shmup gameplay then Space War is the good space battle game which is rendered with 2D pixel graphics and would hook every retro-nostalgic into its arcade gameplay. The players could simply control a plane and should travel through several hostile alien planets.

The players can use their dexterity to fend off incoming dangers and keep shooting down everything that moves. You can use Play the Arcade mode by advancing from level to level, or unlock the Boss-battle mode to fight only the bosses and unlock special planes. The important question would be can you defeat all the bosses?

Space War game effectively features a classic shmup arcade gameplay where you must use your spaceship to destroy hordes of enemy ships and bosses. The players could simply guide the ship and it will shoot automatically.

It is narrated that players have more than 30 different planes to pick from and start blasting enemies. You can also start with your grandfather’s old plane and use collected coins to unlock more powerful ones. It is also possible to unlock special planes by defending bosses.

The game shows that during play the players could pick up several power-ups which help you to shoot faster and more powerful or protect you. They could also collect nukes to blast whole areas and use in-game coins to buy upgrades namely for your shield, gun, bomb, magnet.

In this game the players will come across 8 different planets to unlock, each with multiple levels that would keep you hooked for hours. Every time you lose your lives, players must start over and replay those levels. They should also face 8 EPIC boss battles.

This popular game of Space War generally features beautiful pixel-perfect graphics that would bring out the retro-nostalgic in you. It is also accompanied by an original soundtrack to help you immerse in the action.

The shooting is so cool and everyone can enjoy variety of shooting games from SHMUP HOLIC! In conclusion I’ve gone through many game apps in Play Store, but Space War – 2D Pixel Retro Shooter sincerely stands out from the rest due to the best gaming features.