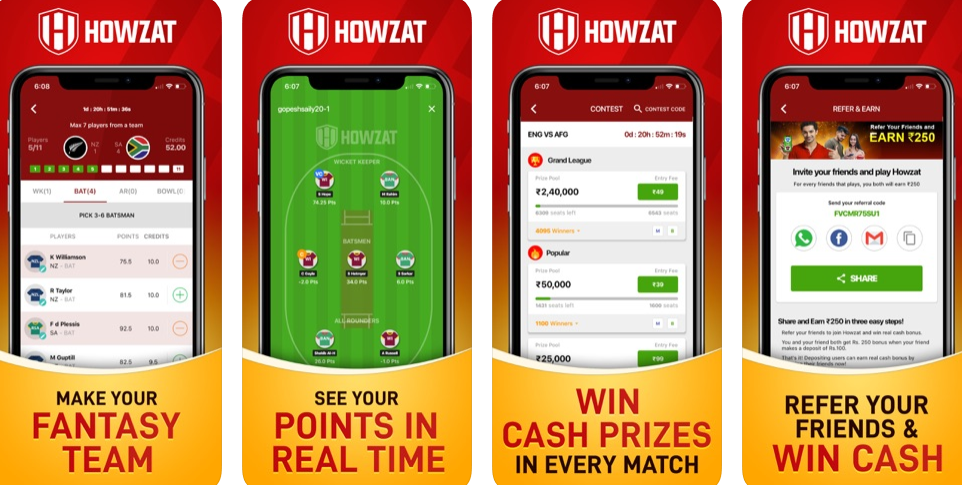 Indian cricket fans follow each and every moment of the game played by Team India and cheer up for the team. They watch each and every match with the same dedication and feel the same excitement as the players do. However, you can’t watch every match and keep and eye on each and every action on the field as you have to perform your daily tasks as well. However, if you want to play your favorite game but are unable to play on the field, you can still fulfill your dream by playing the game on your smartphone.

I’m talking about the latest app called Howzat,developed by Howzat India Private Limited. The app is compatible with Android mobiles as well as iPhone, iPad and iPod touch devices. The app is just perfect for people who want to play fantasy sports like cricket, football and kabaddi and experience the thrill as if they were playing on the ground in the real world. Moreover, you can make big money by winning contests on Howzat.

Howzat is a platform where you can play India’s most popular fantasy cricket, kabaddi and football games and use your knowledge of the sports to lead your team to victory and win real cash. There is a chance for you to become a champion by putting your knowledge of these games to use and win real cash. Once you have downloaded the app, you can create your own fantasy cricket/football/kabaddi team by selecting players from among players playing real matches on the ground. You then need to select a Captain as well as a Vice Captain for your team. You can join various cricket, football and kabaddi contests online to compete with other users’ teams. The players on your team will score points on the basis of their performance in the real match on the ground.

With Howzat, you will play head-to-head contests in grand leagues, tournaments and series of cricket, kabaddi and football, and win real cash. You can play fantasy ODI matches, Test matches, national T20 leagues, IPL, international matches in all three formats, kabaddi leagues, football leagues and a lot more. Always keep track of your fantasy team’s performance with the live fantasy scorecard and enjoy the action. You can invite your friends to join howzat and earn cash referral bonuses for that. Thus, Howzat gives you an opportunity to become a true Fantasy Sports Champion.

Overall, I would say Howzat is a perfect stopover for those who are interested in cricket, football or cricket and want to experience the action in these games without having to go to the field physically. So download Howzat and watch the action unfold as your own fantasy cricket, football, kabaddi teams battle it out on the field. The app is available for free on the Google Play Store and the Apple App Store.

← Meet Locals, Expats, Travellers or Like-minded Individuals Nearby with Outist A Solitaire game that’s easy to pick up and play, but difficult to put down. →