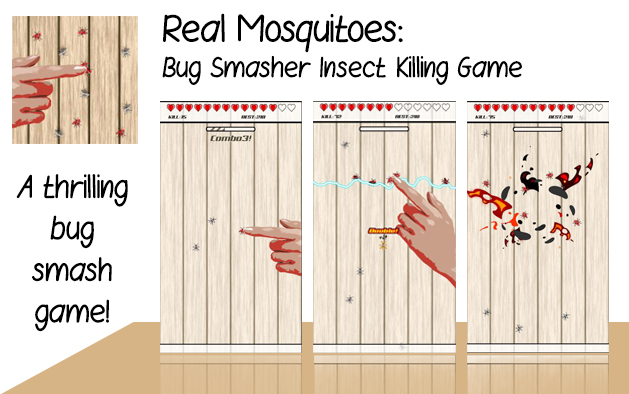 Generally, when people feel bored, they tend to look at their mobile phones. It has become a habit for people to rely on their phones for any sort of companionship. But it is too bad when this becomes unstoppable. Mobile based games are fun and can be played by the user anywhere and at anytime. This has made the usage of mobile phones to increase. Nowadays there are many games in the market that prove to be educational and beneficial to people. Many games are being developed for kids and toddlers alike. Many games now prove to improve mental ability in kids and reduce stress in adults.

Real Mosquitoes: Bug Smasher Insect Killing Game is a mobile based application that is a thrilling and smashing game suitable for people of all ages. This game includes killing mosquitoes by tapping them as they appear on your screen. You need to react fast to not miss any of the insects.

Download and install the ‘Real Mosquitoes: Bug Smasher Insect Killing Game’ mobile app on to your smart phone or other similar devices. Now open the app on your device and play. You will notice numerous insects that appear on the screen. You have to move your finger and tap them to kill them. If you miss one mosquito, you lose one lifeline. You can kill as many insects as possible and reach the high score. There are also many combos and electric effects in the game that makes it more fun while you kill the mosquitoes. The combo effect comes when you kill mosquitoes in an entire row and the electric effect comes when you kill two mosquitoes at once.

Features of the app:

This application has many exciting features.